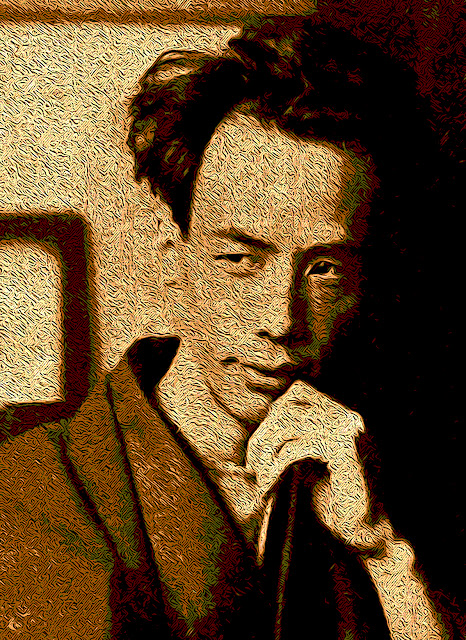 DRAGON
Ryunosuke Akutagawa / A brief survey of the short story 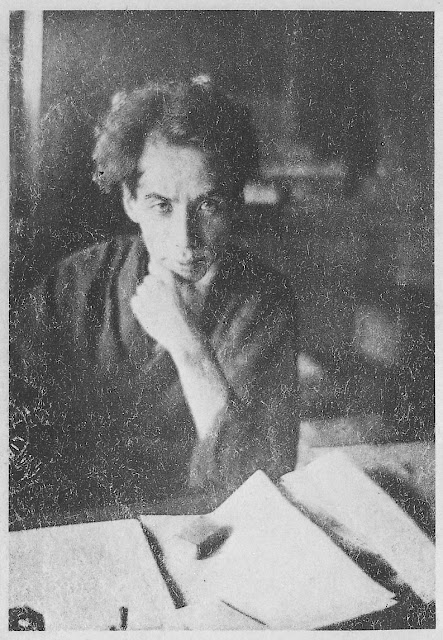 
Haunted by his mother's madness, insomnia and self-loathing, Ryunosuke Akutagawa, one of Japan's leading literary figures, killed himself at 35. But not before a final creative outpouring, says David Peace


E
ighty years ago, in January 1927, Ryunosuke Akutagawa, his wife and his youngest son waited for the train that would take them back to Tokyo. Akutagawa and his family had been away for almost a year in the hope that the peace and quiet of his wife's village would restore Akutagawa's health and nerves. He was 34 years old and short stories such as "Rashomon" and "Jigoku hen" ("Hell Screen") had established him as one of Japan's leading literary figures. These early stories were often grotesque but highly stylised retellings of classical Chinese and Japanese tales. He was also a noted critic and editor.

July 23 1927 was a day of record heat in Tokyo. Akutagawa, however, seemed unbothered by the heat and joked with his children over lunch. Throughout the afternoon and early evening he received the usual stream of visitors eager to speak with one of the leading writers of the day. After dinner, he finished "Man of the West", his essay on Christ as a poet. He then began to write a considered and lengthy letter to Kume, entitled "A Note to an Old Friend", explaining what he was about to do. In this letter, Akutagawa describes his meticulous plans for suicide; he had rejected drowning because he was a strong swimmer, death by hanging because it was unsightly. Having decided on drugs, he had then read extensively on toxicology. Finally, he gives his actual reason for suicide as a "vague anxiety about my future".
In the early hours of July 24, as a light rain finally broke the heat, Akutagawa spoke with his wife for the last time. Then, shortly before dawn, he took a fatal dose of the barbiturate Veronal. He lay down on his futon and fell into a final sleep reading the Bible. By the following evening, his death was national news. Friends and reporters rushed to his house. At a crowded news conference, Kume read aloud from Akutagawa's suicide note: "I am now living in an icy clear world of morbid nerves ... Still, nature is for me more beautiful than ever. No doubt you will laugh at the contradiction of loving nature and yet contemplating suicide. But nature is beautiful because it comes to my eyes in their last extremity ..."
Akutagawa's death came just six months after the death of the Emperor Taisho and the start of the Showa era. For many, it represented not only the end of an era, but the defeat of Japanese intellectualism. Two years later, Kenji Miyamoto began his career as a Marxist critic with an essay on Akutagawa entitled "Haiboku no Bungaku" ("The Literature of Defeat"), the "defeat" being a deliberate echo of the title of the last section of "The Life of a Stupid Man". Howard S Hibbett, in an essay on Akutagawa, quotes Miyamoto:
Akutagawa's 'last words' in literature expressed a feeling of despair toward man's happiness in social life. Like all pessimists, he had to find a conclusive comment on the eternal Weltschmertz with which man is burdened. This is not at all a new idea. It gives rise to the fatal logic of the petty bourgeoisie which views self-despair as the despair of society as a whole. Thus Akutagawa views the agony born of and defined by his physiology and his social class as the eternal agony of humanity.
But these "last words" are not words simply of self-loathing and self-pity. They are harrowing, but utterly honest. Morbid, but beautifully wrought. They are beyond class, beyond nationality. They are universal. Eternal. In their unflinching depiction of personal defeat, these works had their predecessors in Japan, notably in the later novels of Soseki, and their successors in the immediate postwar stories of Osamu Dazai and Ango Sakaguchi. But outside of Japan, perhaps only the prose of Kafka or the poetry of Celan bears comparison.
In September 1926, Akutagawa had written a short piece entitled "Death Register" ("Tenkibo"), which made public for the first time his fears of having inherited his mother's madness. The piece ends at the family burial plot, where Akutagawa recalls a haiku:
A shimmering of heat -
Outside the grave
Alone I dwell.
Eighty years later, on the anniversary of his death, I leave an unlit cigarette on Akutagawa's grave. There are flowers here too, other cigarettes, coffee and sake. A pale girl sits by the grave, writing in a notebook. Crows scream in the trees, mosquitoes bite into her skin. Yards away, the corpse of a cat is being eaten by maggots and flies. But here Akutagawa is no longer alone and, thanks to his last words, neither are we.
· The article above was amended on Friday September 7 2007. Some text was missing from the print version of this story. It has now been added.
THE GUARDIAN 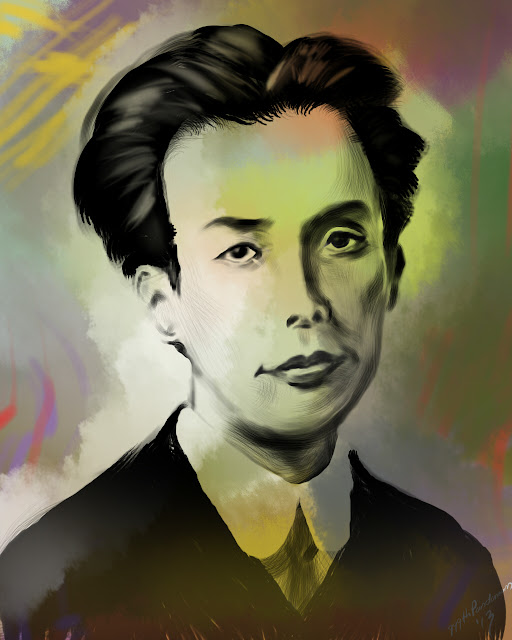 When one thinks of Japanese literature, one must speak of RyunosukeAkutagawa. His short stories, In A Grove and Rashomon were combined and made into the classic movie Rashomon by Kurosawa, but besides this famous story, Akutagawa was a scintillating writer, famous for his short stories, poems and other writings, which he left behind, committing suicide at the age of 35. I decided to read his stories 2 years ago, and he figures quite prominently in Borges' library too, especially his Kappabook.


I am only going to focus on the writer here and not the movie. Akutagawais generally regarded as one of the most widely read persons of his generation. His first published works are translations by Anatole France and Yeats and by the time of his suicide, Akutagawa had left behind brilliant short stories, poems and other writings. It seems that Akutagawawas by nature melancholic, if that doesn't sound too cliched and his writings reinforce a pattern, an aura of profound difference, not only in the manner of his writings but in his persona as well. He was a stylist and his excellence in the short story genre is a thing to marvel at. He was very sensitive in his approach of the subject matter and yet he was very satirical of what he observed and that is well reflected in his work.

Akutagawa's work take a swipe at stupidity, at greed and hypocrisy. His introspection is that of an outsider, a person who is outside and looking in, yet his sermonizing is not a pain for it does not seem so. Thus, in his narratives, we have the dual alternating nature of man and the so-called reality that surrounds us constantly forcing the person under question to answer acutely, in situations of duress, of psychological duress, of inner stress, when they are faced with moral problems, when the scrutinizing forces are inside. And as Howard Hibbet writes in his introduction,Akutagawa was an intellectual and an artist, with a Zen taste for paradox, for dramatizing the complexities of human psychology, and his work contains flashes of mockery to perplex the straightforward reader.

If we consider Rashomon the movie, ( the story is too well known for me to sketch it here) we find that most of the narration is in front either of theRashomon gate with those ceaseless sheets of rain or in front of the prosecutor in the blinding heat. Thus, one feels that the narrator or the voice is the camera, a camera that stays still and captures the essence of the drama, of this narration. We are behind the camera but we do not know exactly what we are behind of. However, in the story called In a grove, the narrator is invisible, as he narrates the testimony of the various protagonists, but he stays invisible, invisible in this drama, for he does not tell us what happened. The narrator only narrates, he does not take sides. His narration is unambiguous, matter of fact, he or she does not think what happened but only says what others say happened or thinkhappened.

As Howard Hebbit writes in his excellent introduction to Rashomon and other stories, Akutagawa is at a distance from the story, at an oblique glance only, for he does not participate in the narration but only seems to be doing so. But is that actually true? Reading In A Grove a few times, I think Akutagawa realizes in this story a phenomenal act of participation for in just telling us what others have testified, he puts the onus on the reader to sketch, to the best of the readers ability or memory to actually what happened. Thus, he forces the reader to reconsider, reappraise the situation, for to be honest, even though in the movie one gets a semblance of what might have actually happened, the story gives you absolutely no chance and it is a dizzy act in the end for the result achieved is exactly what the writer desires to, the culpability of memory and the mixture of fact and fiction. However, Akutagawa lays bare the possibility of mixing desire in this memory for in the end, from the point of view of the raped noble woman she suffered an act of aggression, while from the point of the bandit, she desired it to some extent.

This story is an act of metaphysics, a philosophical enquiry into the nature of truth, the difference between objective and subjective truth, of history, of the politics of history too. It is an attempt to deconstruct on a grand scale whatever we hold holy or unholy, for it questions memory and desire and wishful thinking. within a few pages, Akutagawa forces the reader to think and concentrate and then reconsider the previous thoughts. It is an act of asking the reader, questioning his or her memory and enquiring the validity of memory. The reader must think and see and listen and never judge or speculate.

Akutagawa's art is rare and lies in making the reader reassess and philosophize. That is success beyond what many good writers can dream of. And more importantly, you don't know what he thinks.