DRAGON
The top 10 self-portraits in art

Artemisia Gentileschi was an early Italian Baroque painter, and the only female follower of Caravaggio, whom she worked with in Italy in the early 17th century. Her innovative compositions and focus on Biblical heroines set her apart from her male contemporaries and have lead to the celebration of Gentileschi as a painter with a uniquely female perspective.
Gentileschi was born in Rome, the daughter of celebrated painter Orazio Gentileschi. As a young girl, she served as an apprentice to her father, learning the skills of a professional painter. When her father recognized that she had advanced beyond his training, he hired the painter Agostino Tassi to further her painting skills. In 1612, Tassi raped Gentileschi, an event now inextricably linked to her name. After a lengthy and painful trial, Tassi was found guilty and jailed for eight months. This event had a tremendously negative impact on Artemisia Gentileschi’s reputation, and the artist suffered from gossip that branded her a promiscuous woman.
Soon after the trial, Orazio Gentileschi arranged a marriage for his daughter, after which she moved to Florence, Italy, where she earned the generous support and patronage of the Medici duke, Cosimo II. In 1616, she was the first woman to be accepted into the Florentine Academy of Fine Arts, where she continued her artistic education. During this period, Gentileschi was held in high esteem by both the royal court and scholars, eventually establishing a much-heralded relationship with the astronomer, philosopher, and physicist, Galileo.
She and her husband had two daughters, both of whom eventually became painters. When Gentileschi and her husband separated, she became the head of her own household, enjoying a freedom and independence known to few of her female contemporaries. She and her daughters frequently moved in Italy for career opportunities and to accommodate patronage that included the Medici family and King Charles I of England. In 1641, Gentileschi relocated to Naples where she lived out the remainder of her life. While Gentileschi was a recognized painter in her lifetime, after her death a great deal of her work fell into obscurity and was often attributed to other followers of Caravaggio or to her father.
Art historian Mary Garrard notes that Artemisia Gentileschi “suffered a scholarly neglect that is unthinkable for an artist of her caliber” (Garrard, Artemisia Gentileschi, 3). Only now, in light of recent academic activity, has Gentileschi become recognized for her retelling of biblical stories from the perspective of a woman, such as her famous Judith Beheading Holofernes,1612–13, which portrays the heroine Judith mercilessly decapitating the brutish Holofernes in order to save her people from tyranny, as well as her portrayal of Mary Magdalene in The Conversion of the Magdalene,1615–16. 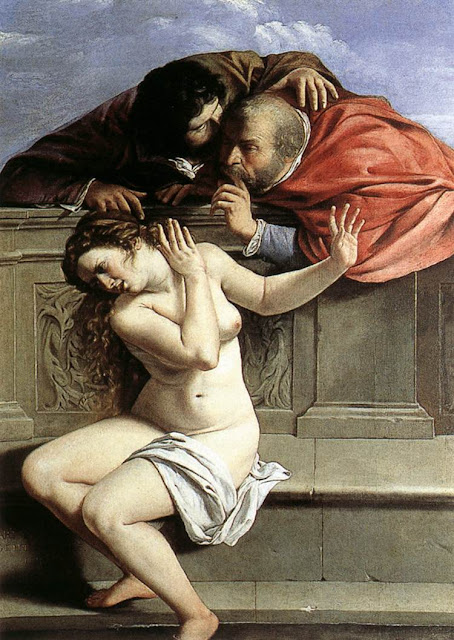 Artemisia Gentileschi at The Dinner Party

Judy Chicago celebrates the link between Artemisia Gentileschi and her often-painted subject, Judith, by repeating the place setting’s color palette. Additionally, the sword image that pierces the first letter “A” of “Artemisia” is the same as that of the “J” in Judith’s illuminated letter, signifying each woman’s physical and emotional strength. The illuminated letter “A” on Gentileschi’s runner is comprised of an artist’s paintbrush and palette, representing her life as an artist.
The plate is surrounded by rich and luscious velvet fabric, modeled on the costumes of Gentileschi’s female subjects. The gold fabric references the color in Gentileschi’s paintings, which became known as “Artemisia gold,” and was often associated with the artist. Chicago explains that this fabric nearly engulfs the plate, representing the safe, protective environment that Orazio Gentileschi attempted to create for his daughter (Chicago, A Symbol of Our Heritage, 82). Underneath the velvet there is fabric decorated in a repeating Baroque-style pomegranate motif, indicative of the time period in which Gentileschi painted. This stenciled motif was modeled on “bizarre silk,” a popular style in the seventeenth century in which pattern was overlaid on pattern, creating a repetitive and unique design.
The butterfly image of Gentileschi’s plate demonstrates the chiaroscuro technique, made famous by one of the artist’s masters, Caravaggio. Chiaroscuro uses a dramatic play of light and dark to convey a theatrical quality to the painting and was popularized during the Baroque period. The “twisting and turning form” on the plate serves also to represent the “extraordinary efforts required of any women of [Gentileschi’s] time who desired to become an artist” (Chicago, The Dinner Party, 97). 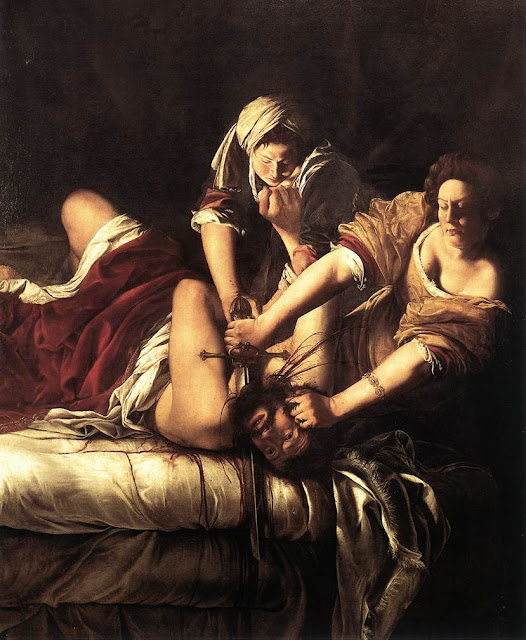