I was born in Amarillo, Texas, grew up in Chicago, and (barely) graduated from the Colorado School of Mines with a degree in exploration geophysics.  There was an oil-boom on, which meant that even someone like me could get work in the oil-fields.  So after college I went to work in Sumatra, as a field geophysicist.  We worked four weeks on and two weeks off, in a jungle camp that was a forty-minute helicopter ride to the nearest town – so this is when my reading life really started.  The game became filling up an entire suitcase with books sufficient to get me through the next two weeks of camp life.  About a year and a half at this job, I got sick after going swimming in a river that was polluted with monkey shit (I remember looking up at about 200 of them, sitting on our oil pipeline crapping away, and thinking: “I wonder if swimming here is okay?”) and came home to try and be Kerouac II.  I worked as a doorman, a roofer, a convenience store clerk, and a slaughterhouse worker (a “knuckle-puller,” to be exact), and all of this contributed to my understanding of capitalism as a benign-looking thing that, as Terry Eagleton says, “plunders the sensuality of the body.”
I’d always been interested in reading, ever since a nun I was secretly in love with turned me on to “Johnny Tremaine” in third grade.  But I’d never met a writer and so it took me awhile to realize that a person could actually write for a living.
In 1986, at a wild party in Amarillo, Texas, I found a copy of People Magazine in which Jay McInernry and Raymond Carver were profiled.  Before this, I’d never heard of an MFA program.  I applied to Syracuse, got in, and had the great good fortune of studying there with Tobias Wolff and Douglas Unger.  I also met my future wife, Paula Redick there, and we got engaged in three weeks, which I believe is still a program record.  Paula got pregnant on the honeymoon, went into early labor at four months, and had to go on total bedrest.  Our first daughter, Caitlin, was born in 1988.  Our second daughter, Alena, was born in 1990, by the same method: five months of bedrest.  So we had two daughters before we’d known each other three years, and it was off to the races.
We had no money and so I worked as a tech writer, first for a pharmaceutical company and then for an environmental engineering company.  During this period (1989-1995), I wrote three abortive first books and then an actual one, “CivilWarLand in Bad Decline.”  One of the stories from this book, “Offloading for Mrs. Schwartz,” ran in The New Yorker in 1992 – the beginning of a long and fruitful relationship with that magazine.
Since 1996 I’ve taught in the Syracuse MFA program, where I’ve had the privilege of teaching some of the most remarkable young American writers of the last 15 years.  I write short stories for The New Yorker and travel pieces for GQ.  The latter have been part of an attempt to avoid the mental rictus that comes with old age.  I’ve traveled to Africa with Bill Clinton, reported on Nepal’s “Buddha Boy,” gone on patrol with the “Minute Men” on the Mexican border, spent a week in the theme hotels of Dubai, and lived incognito in a homeless tent city in Fresno, California.
In addition to my new book, “Tenth of December,” I’ve written three other short story collections "Pastoralia," "CivilWarLand in Bad Decline" (both New York Times Notable Books) and, most recently, "In Persuasion Nation."  “CivilWarLand in Bad Decline” was a Finalist for the PEN/Hemingway Award.  “In Persuasion Nation” was one of three finalists for the 2006 STORY Prize for best short story collection of the year.  I’ve also written a novella-length illustrated fable, "The Brief and Frightening Reign of Phil" the New York Times bestselling children's book, "The Very Persistent Gappers of Frip," illustrated by Lane Smith, (which has won major children’s literature prizes in Italy and the Netherlands), and, most recently, a book of essays, “The Braindead Megaphone.”
I’ve also written two screenplays (one of which is in development with Ben Stiller’s company, Red Hour Films) and have collaborated with the playwright Seth Bockley on stage adaptations of two of my stories, “Jon,” and “CommComm.”  The director Yehuda Duenyas staged “Pastoralia,” at PS 122, and a musical version of “The Very Persistent Gappers of Frip,” was produced and performed in Austin and Los Angeles.
My work has appeared in the O’Henry, “Best American Short Story,” “Best Non-Required Reading,” “Best American Travel Writing,” and “Best Science Fiction” anthologies.  In support of my books, I’ve appeared on The Charlie Rose Show, Late Night with David Letterman, and The Colbert Report.
I’ve read at hundreds of bookstores and universities, including the main reading at AWP in 2011, to a crowd of 2000, and events in support of the work of PEN/ACLU at the Sundance Film Festival and Cooper Union.  I’ve also read and taught in Russia, Belize, England, Amsterdam, Italy, and this summer will be a Writer in Residence at DISQUIET, in Portugal.
In 2001, I was selected by Entertainment Weekly as one of the 100 top most creative people in entertainment, and by The New Yorker in 2002 as one of the best writers 40 and under.  In 2006, I was awarded both a Guggenheim Fellowship and a MacArthur Fellowship.  In 2009 I received an Academy Award from the American Academy of Arts and Letters.  I still teach at Syracuse, and live in the Catskills. 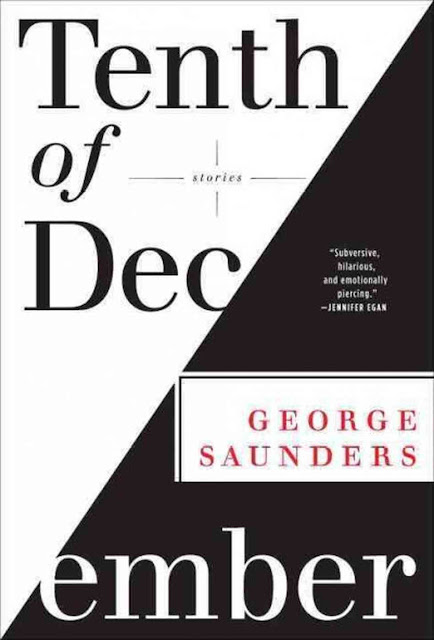 The Tenth of December

Cover story in The New York Times Magazine
PBS Newshour
George Saunders — the beloved cult author known for surreal short stories about American nuttiness — is the master of joy bombs: little explosions of grin-stimulating genius that he buries throughout his deeply thoughtful, endlessly entertaining flights of imagination. His fourth story collection, Tenth of December, brims with laboriously constructed nuggets that will make you beam with unmitigated glee. . . . an irresistible mix of humor and humanity.”—Entertainment Weekly, grade A review
NPR/Weekend Edition Saturday interview with Jackie Lydon
“A book for everyone from serious students of the American short story to those folks just looking for a good read. . . . Saunders is one of the most gifted and seriously successful comic short story writers working in America today. . . . George Saunders is the real thing, the successor to such dark comedians of ordinary speech as Donald Barthelme and Grace Paley. He's a Vonnegutian in his soul and, paradoxically, a writer like no one but himself.”—Alan Cheuse, NPR All Things Considered
“It's no exaggeration to say that short story master George Saunders helped change the trajectory of American fiction. . . . Saunders's characters cling to hope as tenaciously as ever in his new collection,  set in a kind of Dark Ages middle America defined by Darwinian class striving, simulated bread-and-circus distractions (Mr. Saunders is fascinated by amusement parks and reality television) and the substitution of bureaucracy for ethics.”—Wall Street Journal
“Saunders' highly original stories burst with life and characters, showing us the fullness of the soul.”—Minneapolis Star Tribune
Chicago Tribune interview with Saunders
“If storytelling is a form of kinship network, binding readers together in a shared experience, then Saunders is as much an ‘earth mover’ as the best engineer.”—Financial Times
“You could take every class offered in the Oberlin liberal arts catalogue and still not get as close as Saunders does in these pages to understanding the connections among sexism, racism, post-colonialism, late-stage capitalism and white middle-class anxiety. (And you certainly wouldn’t find yourself laughing uproariously at it all.). . . . Each one of these is as funny and off-kilter and formally ingenious as you want a Saunders story to be, but each one is also something else: unabashedly tender.”—Washington Post
“George Saunders captures the fragmented rhythms, disjointed sensory input, and wildly absurd realities of the 21st century experience like no other writer.”—Boston Globe
“It's tough to think of a living short-story writer - or even a dead one - who garners as much peer approval as George Saunders. Alice Munro, maybe, but that's about it. . . . It’s Saunders whose name is both whispered in reverent tones and shouted from the rooftops by other authors. His sparkling new story collection Tenth of Decemberdemonstrates why. . . . Throughout this collection, Saunders uses humor to amplify tension rather than avoid it, and the results are superb. Many of the 10 stories are comfortable with making us uncomfortable. They go for the jugular instead of the funny bone, and they're capable of astounding, unnerving and delighting all at once. The prose is so smartly crafted throughout that it makes me want to go back and re-evaluate all of Saunders' previous books. But first I plan to re-reread this new collection one more time.”—San Francisco Chronicle
“No one writes more powerfully than George Saunders about the lost, the unlucky, the disenfranchised, those Americans who struggle to pay the bills, make the rent, hold onto a job they might detest — folks who find their dreams slipping from their grasp as they frantically tread water, trying to keep from drowning. . . . What injects such schematic moral dramas with real vitality is the energy of Mr. Saunders’s kinetic prose and his ability to depict his characters from both the outside (with plenty of satirical snarl) and the inside (with some genuine feeling). . . . . Regarding the stunning title story in this volume, which itself makes this book worth reading, it’s a deeply affecting tale about the collision of two lives. . . . It’s a measure of Mr. Saunders’s talents as a writer — his brassy language, his narrative instincts, his bone-deep understanding of his characters — that he takes what might have been a contrived and sentimental parable and turns it into a visceral and moving act of storytelling.”—Michiko Kakutani, New York Times
“George Saunders Lives Up To The Hype. . . Tenth of December probably will turn out to be one of the best new books I read in 2013 because Saunders is, indeed, something special. . . . Saunders' short stories have it all — the flexibility of language, the social criticism, the moral ambition, the entertaining dark humor. Check back with me at the end of 2013; if his collection isn't in this year's top 10, it will really have been an extraordinary year for books.”—Maureen Corrigan, NPR, Fresh Air
“Saunders is one of the most audacious and inventive voices in American literature.”—Austin American Statesman
“George Saunders is a writer of staggering tools.”—Dallas Morning News
“[The Tenth of December] is A brilliant book from a brilliant author.”—Daily Nebraskan

LINCOLN IN THE BARDO
In his long-awaited first novel, American master George Saunders delivers his most original, transcendent, and moving work yet. Unfolding in a graveyard over the course of a single night, narrated by a dazzling chorus of voices, Lincoln in the Bardo is a literary experience unlike any other.
February 1862. The Civil War rages while President Lincoln's beloved eleven-year-old son is gravely ill. In a matter of days, Willie dies and is laid to rest in a Georgetown cemetery. Newspapers report that a grief-stricken Lincoln returns to the crypt several times alone to hold his boy's body.
From that seed of historical truth, George Saunders spins an unforgettable story of familial love and loss that breaks free of its realistic, historical framework into a thrilling, supernatural realm both hilarious and terrifying. Willie Lincoln finds himself in a strange purgatory -- called, in the Tibetan tradition, the bardo. Within this transitional state, where ghosts mingle, gripe, and commiserate, a monumental struggle erupts over young Willie's soul.
Lincoln in the Bardo is a bold step forward from one of the most important and influential writers of his generation. Saunders has invented a thrilling new form that deploys a kaleidoscopic, theatrical panorama of voices -- living and dead, historical and invented -- to ask a timeless question: How do we live and love when we know that everything we love must end? 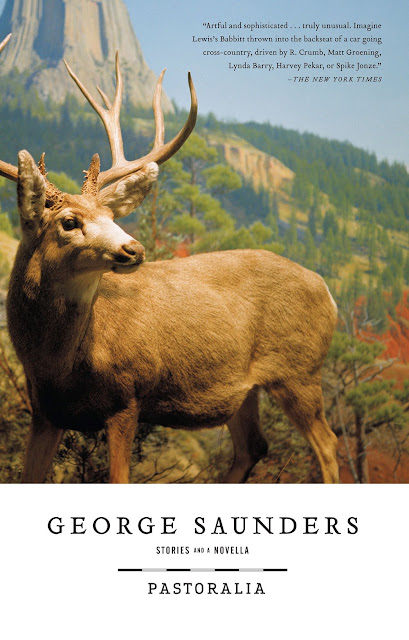