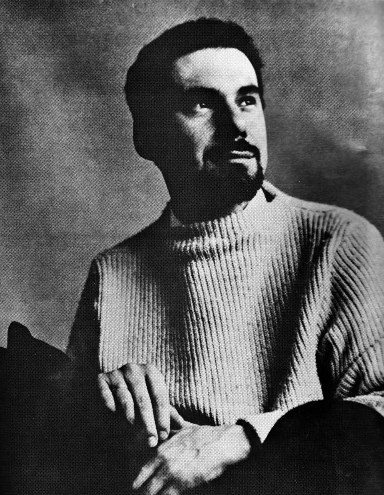 Fernando Charry Lara / On the writing of Eduardo Cote Lamus

Poet, diplomat and politician, Eduardo Cote Lamus was born in Cúcuta,  Colombia, did an external law degree at the University of Bogotá and studied Hispanic philology at the University of Salamanca, Spain. Together with Jorge Gaitán Durán, he made many contributions to literature and culture, placing Colombia on the contemporary world map through the journal Mito (Myth), Colombia’s first cosmopolitan literary publication. His poetic projects radiated into the field of expression and contributed to the renewal of poetic language. His five poetry books were written between 1950 and 1963, a short time span showing the intense process of his creativity; there are important transformations from his first book to his last, Estoraques, considered one of the most successful long poems in Latin American poetry.
As a writer Cote was open to the most important artistic movements of his time, and in his poetry he was influenced by the Spanish poets of the Generation of ’27. He was particularly concerned with the poet’s task of constructing a corpus of poetry. From his penultimate book, La vida cotidiana (Daily Life) (1959), onwards, and drawing on the refreshing oxygen of his stay in Europe, he introduced new elements into his work. This book marks a turn towards a more objective poetry, and introduces a more colloquial, relaxed and anecdotal style.  La vida cotidiana gives the poet wings to penetrate the most intimate and fundamental issues of human experience, and to reveal them to the reader in a fluid and conversational manner, devoid of the inscrutability of his previous book, Los sueños (The Dreams).
With La vida cotidiana a new poetic axis appears – one where writing poetry is like speaking, like naming things without any rhetorical embellishments. The poem flows like everyday speech, which enables the ordinary person to understand and be touched by it. This approach represents great progress in Colombian poetic writing, preparing the terrain of expression for future generations. It arises from the poet’s encounter with various expatriate Nicaraguan writers, with whom he shared the experience of reading the Imagists and T. S Eliot’s views on the need to regain a conversational tone in poetry. In La vida cotidiana the poet condenses, in a balanced and succinct manner, the colloquial and the conceptual. This feature makes his writing unique and is the result of his hard and intense efforts as a “word worker”, attentive to the legacy of the great Spanish-language poets and to contemporary poets writing in other languages.
With Estoraques, his final publication, Eduardo Cote Lamus achieves his fullest expression. This is the book that identifies him as a poet and has a place among the most distinctive of Colombian poetic works. Estoraques is a long poem of five hundred lines, divided into eight parts. It was published four years after La vida cotidiana, and its appearance marks a high point in poetic creation. It is a poem with many qualities, among which its precision and great sense of rhythm are outstanding. It is surprising, too, that the inspiration for this work is the estoraques: rocky formations shaped by erosion. In the words of Andrés Holguín: “Reading this song, we find ourselves facing a wider version of death, which becomes a universal phenomenon. In the ‘estoraques’, those strange natural formations between Cúcuta and Ocaña, the wind-time has petrified figures, castles and citadels similar to ancient civilizations. Symbols multiply in this intense poem. The poet confronts the tragic fate of man. The ritornello is that of time. Thus, Cote Lamus reaches his highest poetic expression, and the most cosmic vision of death.”