Abraham "Bram" Stoker (8 November 1847 – 20 April 1912) was an Irish novelist and short story writer, best known today for his 1897 Gothic novel Dracula. During his lifetime, he was better known as personal assistant of actor Henry Irving and business manager of the Lyceum Theatre in London, which Irving owned.

"It is the eve of St. George's Day. Do you not know that tonight,


when the clock strikes midnight,


all the evil things in the world will have full sway?" 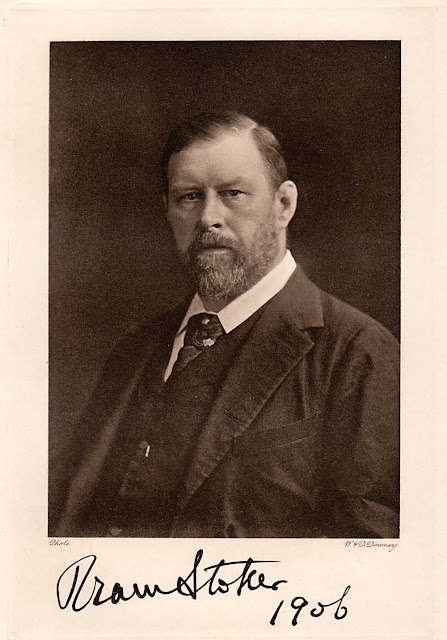 Written in epistolary fashion, Stoker introduces us to the young solicitor Jonathan Harker as he travels to Transylvania to assist Count Dracula in a real estate transaction. While the first chapter starts off pleasantly enough, Harker soon begins to note odd happenings and details of the people and events he experiences while travelling deeper and deeper into the Carpathians. Gloomy castles standing high in the mountains, odd figures half-obscured by the dark, eerie landscapes with flashing lights, and howling wolves trail Harker as he journeys ... unaware of the mystery and horrors he and his love Mina Murray are soon to become entangled with. Only with the help of such noted characters as Professor Van Helsing, John Seward, Arthur Holmwood, and Quincey Morris does good prevail over evil.

Dracula is often referred to as the definitive vampire novel, but it is possible that Stoker was influenced by Joseph Sheridan LeFanu's (1814-1873) Gothic vampire novella Carmilla(1872). While Stoker wrote numerous novels and short stories, he is chiefly remembered today as the author of this best-selling novel. It has been translated to dozens of languages, inspired numerous other author's works, been adapted to the stage and film including the first version,Nosferatu (1922), starring Max Schreck. Dracula is still widely read and remains in print today.

Abraham "Bram" Stoker was born on 8 November 1847 in Clontarf, a suburb of Dublin, Ireland, the third of seven children--William Thornley, Mathilda, Thomas, Richard, Margaret, and George--born to Charlotte Mathilda Blake Thornely (1818-1901) and Abraham Stoker (1799-1876), Civil Servant. He was a sickly child, spending great amounts of time bed-ridden, barely able to walk. However, having fully recovered, in 1864 he entered Trinity College, Dublin to study mathematics, and, despite his earlier years of illness became involved in athletics, winning many awards. He was also elected President of the Philosophical Society. After graduating with honours in 1870 he followed in his father's footsteps and joined the Civil Service with Dublin Castle, which inspired his The Duties of Clerks of Petty Sessions in Ireland(1879). From his great love of the arts Stoker also started to write theatre reviews for the Dublin Evening Mail. One particular review of a performance of William Shakespeare's Hamlet with actor [Sir] Henry Irving (1838-1905) in the lead role led to a great friendship between the two men and in 1878 Irving asked Stoker to be the manager of his Lyceum Theatre in London, England, a position he held for almost thirty years. Later Stoker would publish Personal Reminiscences of Henry Irving (2 volumes, 1906) and Snowbound: The Record of a Theatrical Touring Party (1908) which includes such theatre-based stories as "The Slim Syrens", "Mick the Devil", and "A Star Trap".

In 1878 Stoker married actress Florence Balcombe (1858-1937) with whom he had a son, Irving Noel Thornley (1879-1961). Stoker left his job in Dublin and the couple settled in London. It was here that Stoker became acquainted with many famous actors and such other notable authors of the time as Sir Arthur Conan Doyle, Oscar Wilde, and William Butler Yeats. While not involved in the theatre, including travelling with them on tours in Europe and North America which inspired A Glimpse of America(1886), Stoker started to write novels including The Primrose Path (1875), The Snake's Pass (1890), The Watter's Mou' (1895), The Shoulder of Shasta (1895), Miss Betty(1898) and short stories collected in Under the Sunset (1881).

In 1890 Stoker holidayed in the North-east coast fishing village of Whitby in Yorkshire, where it is said he gleaned much inspiration for his novel Dracula. Other works by Stoker include The Mystery of the Sea (1902), his Egyptian mummy-themed The Jewel of Seven Stars (1903), The Man(also titled The Gates of Life 1905),Lady Athlyne (1908), The Lady of the Shroud (1909), Famous Impostors(1910), and The Lair of the White Worm (1911) which also includes elements found in Dracula like unseen evil, strange creatures, inexplicable events, and supernatural horrors.

The storm which was coming was already making itself manifest, not only in the wide scope of nature, but in the hearts and natures of human beings. Electrical disturbance in the sky and the air is reproduced in animals of all kinds, and particularly in the highest type of them all--the most receptive--the most electrical. So it was with Edgar Caswall, despite his selfish nature and coldness of blood. So it was with Mimi Salton, despite her unselfish, unchanging devotion for those she loved. So it was even with Lady Arabella, who, under the instincts of a primeval serpent, carried the ever-varying wishes and customs of womanhood, which is always old--and always new.--Ch. 27 Bram Stoker died in London, England on 20 April 1912. His ashes were mingled with his son's and they now rest in the Golders Green Crematorium in London, England. His wife Florence survived him by twenty-five years and had Dracula's Guest and Other Weird Stories published in 1922. Some claim that the story "Dracula's Guest" was actually supposed to be the first chapter for his novel Dracula. It also includes such titles as "The Gipsy Prophecy", "The Burial of the Rats", "A Dream of Red Hands", and "The Secret of the Growing Gold".

"We are all drifting reefwards now, and faith is our only anchor."
Ch. 23, Jonathan Harker's Journal, Dracula 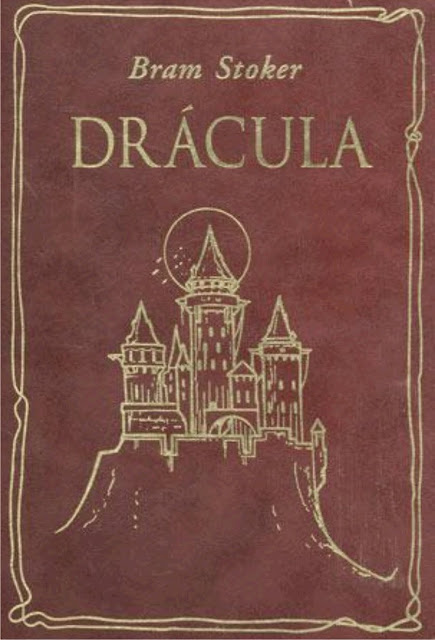 Under the Sunset (1881), comprising eight fairy tales for children.
Snowbound: The Record of a Teatrical Touring Party (1908)
Dracula's Guest and Other Weird Stories (1914)