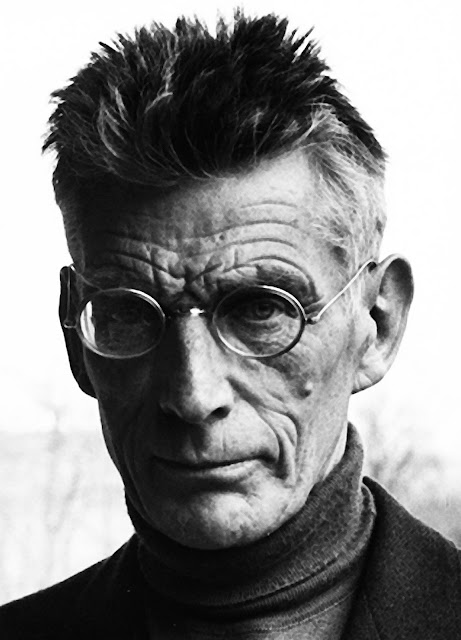 Irish novelist and playwright, one of the great names of Absurd Theatre with Eugéne Ionesco, although recent study regards Beckett as postmodernist. His plays are concerned with human suffering and survival, and his characters are struggling with meaninglessness and the world of the Nothing. Beckett was awarded the Nobel Prize for Literature in 1969. In his writings for the theater Beckett showed influence of burlesque, vaudeville, the music hall, commedia dell'arte, and the silent-film style of such figures as Keaton and Chaplin.

"We all are born mad. Some remain so." Samuel Beckett was born in Dublin into a prosperous Protestant family. His father, William Beckett Jr., was a surveyor. Beckett's mother, Mary Roe, had worked as a nurse before marriage. He was educated at the Portora Royal School and Trinity College, Dublin, where he took a B.A. degree in 1927, having specialized in French and Italian. Beckett worked as a teacher in Belfast and lecturer in English at the École Normale Supérieure in Paris. During this time he became a friend of James Joyce, taking dictation and copying down parts of what would eventually become Finnegans Wake (1939). He also translated a fragment of the book into French under Joyce's supervision.
In 1931 Beckett returned to Dublin and received his M.A. in 1931. He taught French at Trinity College until 1932, when he resigned to devote his time entirely to writing. After his father died, Beckett received an annuity that enabled him to settle in London, where he underwent psychoanalysis (1935-36).
As a poet Beckett made his debut in 1930 with Whoroscope, a ninety-eight-line poem accompanied by seventeen footnotes. In this dramatic monologue, the protagonist, Rene Descartes, waits for his morning omelet of well-aged eggs, while meditating on the obscurity of theological mysteries, the passage of time, and the approach of death. It was followed with a collection of essays, Proust  (1931), and novelMore Pricks Than Kicks (1934). From 1933 to 1936 he lived in London.
In 1938 Beckett was hospitalized from a stab would he had received from a pimp to whom he had refused to give money. Around this time he met Suzanne Dechevaux-Dumesnil, a piano student, whom he married in 1961. When Beckett won the Nobel Prize, Suzanne commented: "This is a catastrophe." Beckett refused to attend the Nobel ceremony.
Beckett's career as a novelist really began  with Murphy (1938), which depicted the protagonist's inner struggle between his desires for his prostitute-mistress and for total escape into the darkness of mind. The conflict is resolved when he is atomized by a gas explosion.
When World War II broke out, Beckett was in Ireland, but he hastened to Paris and joined a Resistance network. Sought by the Nazis, he fled with Dechevaux-Dumesnil to Southern France, where they remained in hiding in the village of Roussillon two and half years. Beckett worked as country laborer and wrote Watt, his second novel, which was published in 1953 and was the last of his novels written originally in English. It portrayed the futile search of Watt (What) for understanding in the household Mr. Knott (Not), who continually changes shapes.
After the war Beckett worked briefly with the Irish Red Cross in St. Lo in Normandy. Between 1946 and 1949 he produced the major prose narrative trilogy, Molloy, Malone Meurt, and L'innommable, which came out in the early 1950s. The novels were written in French and subsequently translated into English with substantial changes. Beckett said that when he wrote in French it was easier to write "without style" – he did not try to be elegant. With the change of language Beckett escaped from everything with which he was familiar. These books reflected Beckett's bitter realization that there is no escape from illusions and from the Cartesian compulsion to think, to try to solve insoluble mysteries. Beckett was obsessed by a desire to create what he called "a literature of the unword." He waged a lifelong war on words, trying to yield the silence that underlines them. 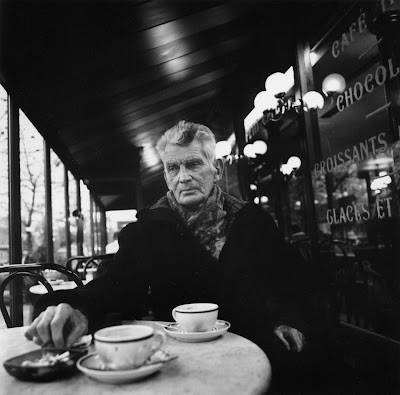 En attendant Godot (Waiting for Godot), written in 1949 and published in English in 1954, brought Beckett international fame and established him as one of the leading names of the theater of the absurd. Beckett more or less admitted in a New York Post interview by Jerry Tallmer that the dialogue was based on conversations between Suzanne Deschevaux-Dumesnil and himself in Roussillon. The tragi-comedy in two acts, opened at the Théâtre de Babylone on January 5, 1953, and made history. Two tramps, Vladimir and Estragon, who call each other Gogo and Didi, meet near a bare tree on a country road. They wait for the promised arrival of Godot, whose name could refer to 'God' or also the French name for Charlie Chaplin, 'Charlot'. To fill the boredom they try to recall their past, tell jokes, eat, and speculate about Godot. Pozzo, a bourgeois tyrant, and Lucky, his servant, appear briefly. Pozzo about Lucky: "He can't think without his hat." Godot sends word that he will not come that day but will surely come the next. In Act II Vladimir and and Estragon still wait, and Godot sends a promising message. The two men try to hang themselves and then declare their intention of leaving, but they have no energy to move. In Beckett's philosophical show, there is no meaning without being. The very existence of Vladimir and Estragon is in doubt. Without Godot, their world do not have purpose, but suicide is not the solution to their existential dilemma. 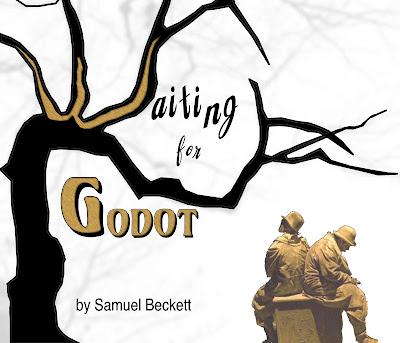 VLADIMIR: We have to come back tomorrow.


VLADIMIR: To wait for Godot. After Waiting for Godot Beckett wrote Fin de partie (1957, Endgame) and a series of stage plays and brief pieces for the radio.Endgame developed further one of Beckett's central themes, men in mutual dependence (Hamm and Clov occupy a room with Nagg and Nell who are in dustbins). "One day you'll be blind, like me", says Hamm. "You'll be sitting there, a speck in the void, in the dark, for ever, like me." In Krapp's Last Tape (1959) Beckett returned to his native language. The play depicted an old man sitting alone in his room. At night he listens to tape recordings from various periods of his past.
In several works Beckett used dark humor to establish distance to his grim subjects. In his last full-length novel, Comment c'est (1961, How It Is) the protagonist crawls across the mud dragging a sack of canned food behind him. He overtakes another crawler who he tortures into speech and is left alone waiting to be overtaken himself by another crawler who will torture him in turn.
In the 1960s Beckett wrote for radio, theater, and television. During this decade, Billie Whitelaw became one of the most noted interpreter of Beckett's works. Her performances include Play, Not I, and Footfalls. She also acted in such films as Frency (written by Anthony Shaffer, dir. by Alfred Hitchcock, 1972), The Omen (1976), The Water Babies (1979), Maurice (based on E. M. Forster's posthumously published novel, dir. by James Ivory, 1987), and The Krays (1990). Alan Schneider staged most of the American premiers of Beckett's plays. Schneider also directed the short Beckett movie Film, starring Buster Keaton.
In the 1970s appeared Mirlitonnades (1978), a collection of short poems, Company (1979) and All Strange Away (1979), which was performed in 1984 in New York. Catastrophe (1984) was written for Vaclav Havel and was about the interrogation of a dissident. In 1988, Waiting for Godot, was produced at Lincoln Center. Steve Martin, Robin Williams, and Bill Irwin played in the central roles.
Beckett lived on the rue St. Jacques. At the neighborhood cafe he met his friends, drank espresso, and smoke thin cigarettes. He also had a country house outside Paris. Beckett maintained his usual silence even when his eightienth birthday was celebrated in Paris and New York. At the age of seventy-six he said: "With diminished concentration, loss of memory, obscured intelligence... the more chance there is for saying something closest to what one really is. Even though everything seems inexpressible, there remains the need to express. A child need to make a sand castle even though it makes no sense. In old age, with only a few grains of sand, one has the greatest possibility." (fromPlaywrights at Work, ed. by George Plimpton, 2000)
Beckett's wife died in 1989. The author had moved just previously to a small nursing home, after falling in his apartment. Beckett lived in a barely furnished room, receiving visitors, writing until the end. From his television he watched tennis and soccer. His last book printed in his lifetime was Stirring Still (1989). Beckett died, following respiratory problems, in a hospital on December 22, 1989. It it rumored that Beckett gave much of the Nobel prize money to needy artists. 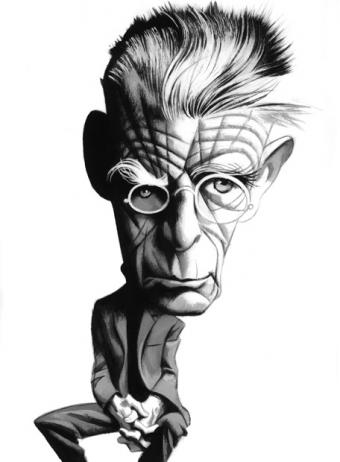