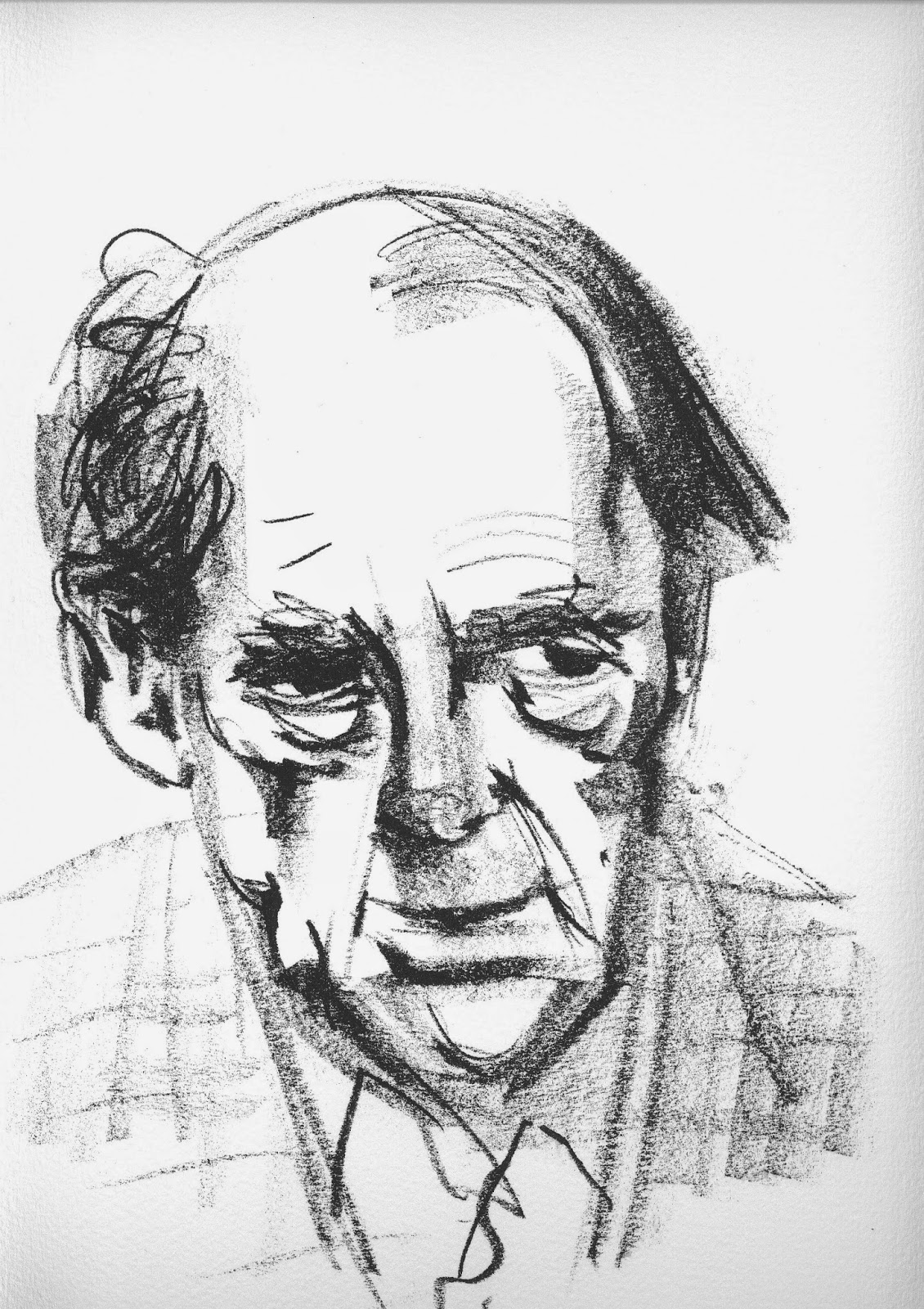 Böll's first book was published in 1949 and his last one appeared after his death in 1985. He won the Prize of the Gruppe '47 (Group 47) in 1951, and was awarded the Büchner Prize - Germany's highest literary honor - in 1967. In his lifetime, he published eight novels, numerous short stories, brilliant satires, radio plays, and two theatrical plays.

Böll grew up Catholic in the town of Cologne. He began writing before the Second World War, in which he served as a private from the beginning to the end. Publishing at first in the short era of the "Trümmerliteratur" (the literature of the rubble) in the immediate post-war period, his subjects were both the war and the lives of people struggling after the war with its effects. Böll was at times controversial, the author of both bestselling works and a socially-engaged commentator on the state of the German people.

Living mainly in Cologne, Böll and his family traveled widely for the times. They spent much time on Achill Island off the west coast of Ireland. His cottage there is now used as a guest house for international and Irish artists. He recorded some of his experiences in Ireland in his humorous book "Irisches Tagebuch" (Irish Journal).
From the 1950s on, his essays and speeches appeared regularly and were also published as collections. Several documentaries were made of him, and he gave numerous interviews for radio and television, of which transcripts of many were also published. He was president of the then West German P.E.N. Center and subsequently president of the International P.E.N. organization.

Before being awarded the Nobel Prize for Literature in 1972 after the publication of his novel "Gruppenbild mit Dame" (Group Portrait with Lady), he had come under attack for his subtle essay that January questioning the journalist practices of the Springer Press in Germany. He was the main intellectual involved in the debates concerning terrorism and the state's battle against it. His voice was so established that by the late 1970s a poll found that 89% of those Germans questioned could identify him.
Before his death, Böll's work had been translated already into more than 30 languages. He remains one of Germany's most widely known authors, with the publication of a 27 volume edition of his writings finished in 2010.

Chronology
Böll was born on December 21st, 1917, in Cologne, Germany to a middle-class, Catholic family. His father was a carpenter specializing in benches and cabinets for churches, whose first wife had died. Böll's father had remarried.
Attending a Catholic high school (Gymnasium), Böll successfully resisted joining the Hitler Youth during the 1930s. He started and broke off an apprenticeship to learn the trade of bookseller, then matriculated into the University of Cologne. His first literary attempts date to 1936.
Drafted into compulsary work service and then the army (Wehrmacht), he served in France, Romania, Hungary and the Soviet Union, and was wounded four times before being captured by Americans in April 1945. He was in Prisoner of War camps until September. During his six years in uniform, he wrote letters almost daily to his wife and family, which were published after his death. His war injuries, which he attempted to prevent healing in order to stay longer as unfit, were a factor in his often poor health.
Böll attempted to live solely as a writer after the war, but was also supported by the income of his wife Annemarie, who worked for several years as a middle school teacher. Together with his wife, who had the primary involvement, the Bölls collaborated on numerous translations of Irish, English and American literature.
Böll's first novel was "Der Zug war pünktlich" (The Train Was on Time), published in 1949. He won the Prize of the Gruppe '47 (Group 47) at Bad Durkheim in 1951. In the immediate post-war period, he adapted memories of the War and wrote of its effects on the lives of ordinary people in his works.
The novel "Billard um halbzehn" (Billiards at Half-past Nine) portrayed three generations of a family and showed the rise and continuity of the Nazi past in Germany.
His novel "Ansichten eines Clowns" (Opinions of a Clown) caused much debate for its depiction of the Catholic church in Germany. In 1976, Böll and his wife left the Catholic church in protest over church taxation.
http://www.dhm.de/lemo/objekte/pict/BiographieBoellHeinrich_photoBoellHeinrich/index.html
depicts Böll on the 2nd of December 1953 at a "Wednesday Discussion" of Cologne writers.
I. 1917-1936
1917 Heinrich Böll is born the sixth child of Viktor Böll, master carpenter and woodcarver, and his wife Maria, in Cologne on the 21st of December. Wartime conditions including hunger are at their worst.
1921 The family moves from the southern part of Cologne to the outlying district of Raderberg.
1924 Böll begins elementary school in Köln-Raderthal.
1928 Böll enters the Kaiser-Wilhelm-Gymnasium, a well-regarded school in Cologne based on the classics.
1929  The Great Depression brings the collapse of a small bank for craftsmen in which Böll's father had invested.  The Bölls have to sell their house in Raderberg and move back to the south-city district Cologne.  In the subsequent years, the family knows visits to pawnbrokers, bailiffs knocking on the door, and the seizure of household goods as part of everyday life.
1933  After Hitler becomes Chancellor, the Nazis spread terror in Cologne.  The Böll family discusses political events frequently and openly. Böll participates in clandestine meetings of Catholic youth groups held in their apartment.
1936 Dated manuscripts in Böll's papers, including novel fragments, short stories, and poems - show that he starts writing at this time.
II. 1937-1945

1937 Böll finishes the Gymnasium and passes his Abitur examinations (school-leaving certificate). He begins an apprenticeship with the bookseller Math. Lemperz in Bonn, but leaves without finishing it.
Between 1939 and 1945 Böll is stationed:
- at a training camp in Osnabrück (August 39 - May 1940)
-in Poland (May and June 1940); in France (June - September 1940)
- in Germany (September 1940 - May 1942)
- in France (May 1942 - October 1943)
- in Russia, the Crimea, Odessa (October 1943 - February 1944)
- at various places on German territory from March 1944 until April 1945, when he is taken prisoner.
Böll temporarily deserts and goes into hiding with his wife in Much, not far from Cologne, but on the other side of the Rhine.  Fearing he could be executed as a deserter, he rejoins the army at the end of February 1945.
Almost every day, he writes a letter to his family and to his fiancée Annemarie Cech, whom he marries in 1942.
During the war at least 20,000 people die in a total of 262 air-raids on Cologne.  Almost half of its nearly 70,000 pre-war buildings are between 60% to 100% destroyed.  Of its pre-war population of 770,000, only about 20,000 are still living in the city at the beginning of April 1945.  On the 8th of April 1945, Cologne is liberated by the American army.
1945 Böll is released from captivity as a POW in September. He joins his pregnant wife in Much. His son Christoph, who was born in July, dies in October due to the harsh conditions. 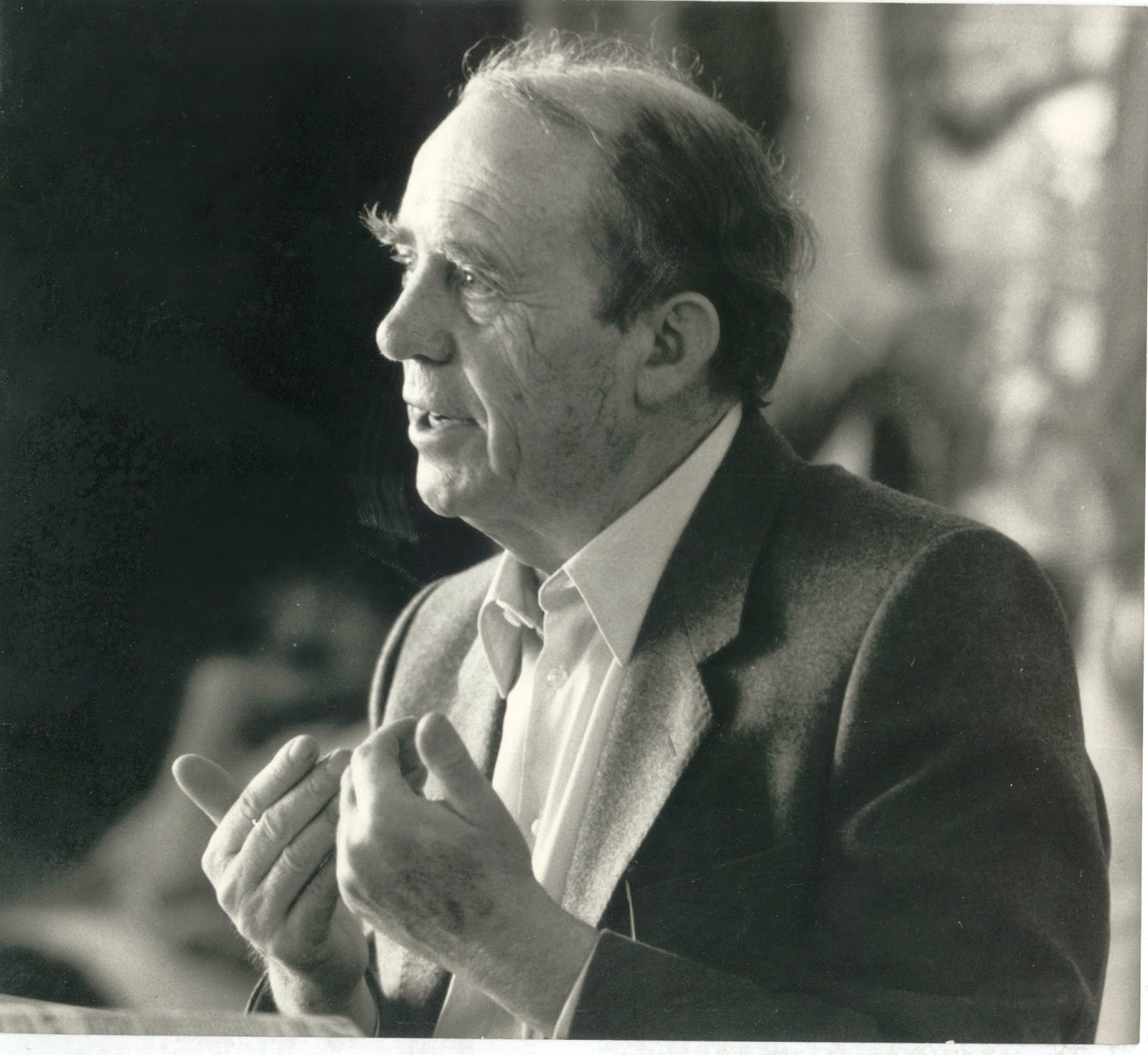 Where Language is Home:
A Conversation on Heinrich Böll
at Goethe Institut New York

The author Heinrich Böll is among the contemporary literary greats of Germany, whose work earned him accolades throughout his career both at home and abroad- including the Nobel Prize for Literature in 1972. The Brooklyn publisher Melville House has reintroduced Böll to his American audience with its release of eight new English translations in the series "The Essential Heinrich Böll" over the past year.

The series and the life of the author behind it formed the subject of "An Evening on The Essential Heinrich Böll," a panel discussion with artist René Böll, Wall Street Journal critic Sam Sacks, and German-Irish author Hugo Hamilton at Goethe-Institut New York on January 16. The discussion began with a personal narrative by René Böll, who described his father's relationship to Ireland with a slide presentation of family photos from their time on Achill Island, off the western coast ofIreland, in the 1950s. Though Heinrich Böll was deeply attached to his home city of Cologne, Ireland was "always on his mind," a place that served as an "escape" from the war-torn city.

He presented images of Böll family life in a cottage with no electricity or running water, where the children were home-schooled by their mother and lived in relative anonymity- and isolation- while their father wrote and their mother translated English books into German. As a hand-written list of points appeared on the screen, René Böll paused and expounded on a few anecdotes: the title read "irische Themen," and, as he explained, these were the recollections and remarks that would form Böll's Irish Journal, a book documenting his travels throughIreland in the 1950s.

This view of Heinrich Böll illuminated his relationship with a country that afforded him the space to work in ways a destroyed Cologne could not. It also highlighted the importance of Böll's observations ofGermany from this distance, in a place that was largely "still asleep" to the war and the Holocaust, as Hugo Hamilton, author of "The Speckled People," described the remoteness of Irish society in the 1950s.

öll grappled with the consciousness of a postwarGermany in his writing, meditating on themes that directly confronted the physical and psychological destruction in the aftermath of the Second World War. Sacks noted in the "stylistic ingenuity and brilliance" of works such as "Billiards at Half-Nine" and "The Clown," a deep concern for humanity and a "constant search to regain innocence" of Böll'sTrümmerliteratur, or "literature of the rubble," as German post-war literature is often characterized.

Himself a witness to combat as a private wounded four times throughout WWII, Böll engaged Germany's traumatic and immediate past and attempted to muster a language that could take on a period that seemed to defy description or reflection. His linguistic and stylistic efforts were Böll's tool to produce a literature free of a "German language corrupted by Nazi propaganda," said Sacks. Böll was influenced by writing outside of the German writing tradition, added Hamilton, as he developed a language that would "reshape of the moral consciousness of Germany."

Though he may have found temporary refuge in the quiet of an Irish island, "the German language was his home," said René Böll. Remaining true to his art with an acute social awareness of his time, Böll's legacy extends far beyond his literary stance into a compelling figure for present-day, English-language readers alike. 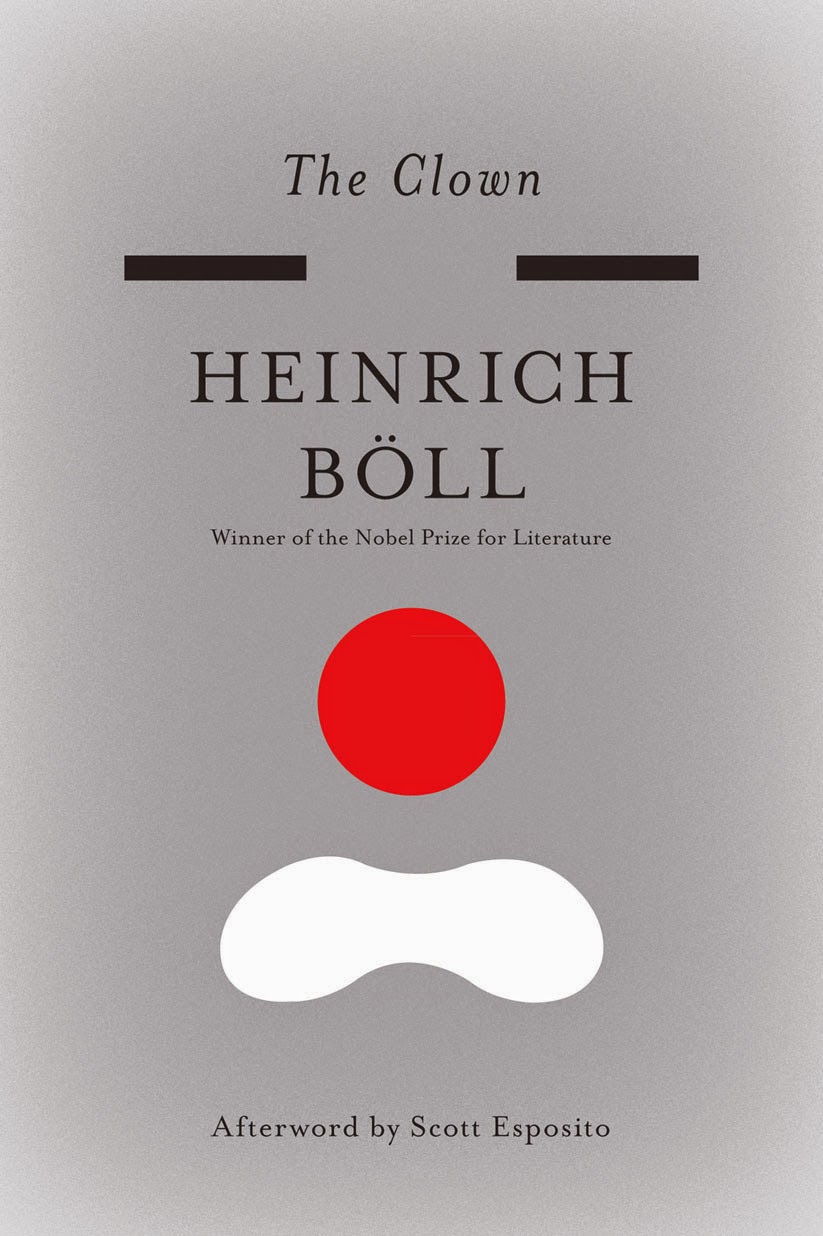 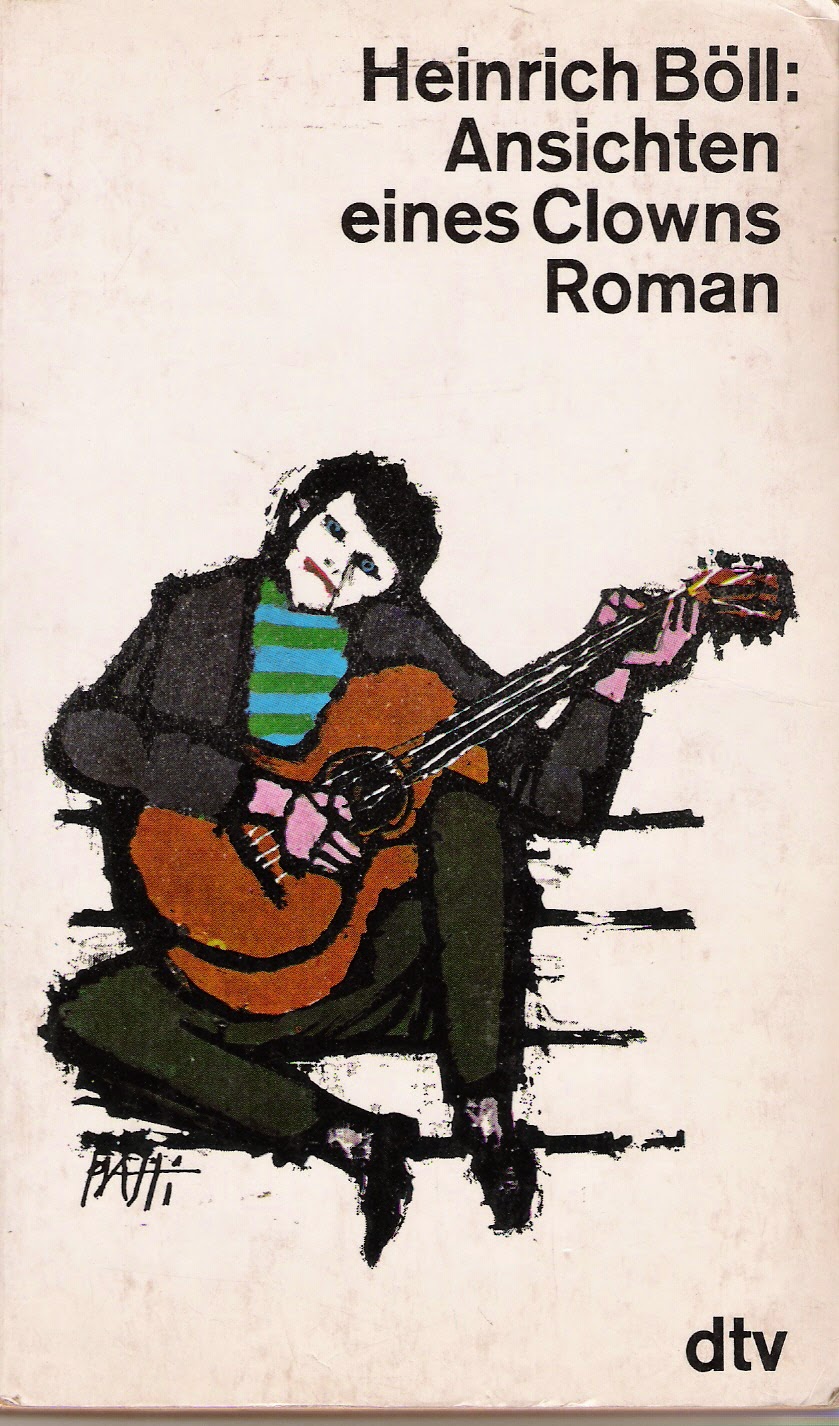